The implications are far-reaching, from the predicted existence of quasiparticles with non-abelian exchange statistics to novel approaches to quantum computing where the topology of qubit protects it against decoherence.

In recent years, it has been realized that one can design materials with induced p-wave superconducting order by combining conventional superconductors and semiconductors with strong spin-orbit interaction. This exotic superconducting state with broken time-reversal symmetry is known to have localized Majorana Fermions as end states. These are non-local modes predicted to have non-Abelian exchange statistics, meaning that quasiparticle exchange operations act non-trivially on the wavefunction and, in general, do not commute. Furthermore, the quantum state of Majorana modes, represented by the parity of the fermion number, is topologically protected and therefore useful for quantum computation purposes. 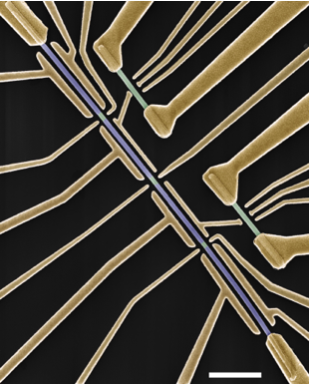 False color scanning electron micrograph of a Majorana device designed to realize a topological qubit. Blue represents the epitaxial aluminum layer grown on the facets of an InAs nanowire (depicted in green), while the yellow gates (made of titanium and gold) are used to control the device. The scale bar is 1 μm.

In this center we focus on three different platforms of hybrid superconductor-semiconductor heterostructures, designed to support topological superconductivity and to eventually become the basis for topological quantum computation. The semiconducting part are realized in the form of vapor-liquid-solid InAs nanowires, two-dimensional electron gases embedded in InAs/InGaAs heterostructures, and finally selective-area-growth InAs nanowires. All these materials are grown by means of molecular beam epitaxy (MBE) and directly contacted to an epitaxial Aluminum layer in the MBE chamber without breaking the vacuum, thus guaranteeing the cleanest semiconductor/superconductor interface achievable nowadays.
Starting from these hybrid platforms, we design and investigate sophisticated devices able to observe and manipulate Majorana modes in order to realize scalable topological qubits, which are expected to be ideal candidates to build a fault-tolerant quantum computer.