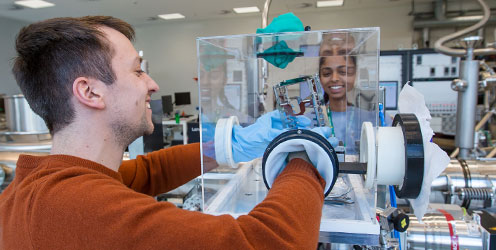 The Center for Quantum Devices (QDev, for short) studies how to create, control, measure, and protect quantum coherence and entanglement in solid-state electronic devices.

The miniaturization and scaling of modern electronics, yielding billions of transistors on a chip, has a quantum analog in which quantum states of transistors are made to interact, and hence become entangled, with the specificity of a computer algorithm.

The general power of such a device to communicate, compute, measure, and simulate physical and chemical systems is unknown.  From known examples where entanglement serves as a resource, one can expect rich and surprising phenomena to emerge from such a device, reflecting the large space of quantum states compared to the number of classical states.

Once entanglement is brought under control and becomes a resource, the technological harvest has the potential to revolutionize communication, information processing, and simulation of quantum mechanical systems from novel superconducting materials to biomolecules. 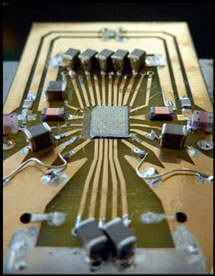 It is not known how powerful fully controlled quantum systems are; the question is itself a new branch of theoretical computer science.

It is a remarkable situation that the dual challenges of building large controlled interacting quantum devices and understanding their power is developing side by side.

At QDev, projects and ideas are intertwined, and we anticipate students, postdocs, staff, and visitors moving between specific implementations and inventing hybrid technologies by combining approaches.