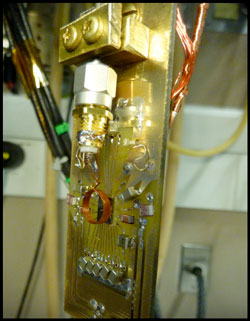 A PC board with a GaAs based spin qubit mounted
to the bottom of a 10mK coldfinger. The GaAs
substrate in the center consists of several isotopes,
69Ga, 71Ga, and 75As, all of which contain non-
zero nuclear spins. Although the nuclear spins can
be controlled to some degree by NMR signals
applied to the small coil located near the chip, or
via dynamical nuclear polarization techniques that
involve hyperfine interactions with the electronic
spins of the qubit itself, QDev is also investigating
"hyperfine-free" quantum devices fabricated from
new materials such as 12C nanotubes and GeSi
core-shell nanowires.

In most implementations to date, the dominant source of decoherence of separated spins is hyperfine coupling to host nuclei, which appears as local Zeeman fields about which the separate spin precess.

The hyperfine environment is dynamic, evolving over time scales from microseconds to minutes, and is itself a rich and interesting system related to the so-called central spin problem [1,2].  In the past few years, several experiments have demonstrated control over the nuclear ensemble using single-electron dynamic nuclear polarization (DNP) [3,4].  We plan to extend these studies by creating materials with specific nuclear-spin regions, so that spin information can be intentionally coupled to nuclei, opening the possibility of storing coherent quantum information in nuclear ensembles [5].  Nuclear spin-free materials (Si, C) can be made with specific regions of nuclear spin ½ (respectively 29 Si and 13 C) inserted during growth [6,7].

Hyperfine coupling can be avoided by using predominantly zero-nuclear-spin materials such as silicon, germanium, or carbon.  Holes within the Ge core have a small hyperfine coupling to the ~7% of nonzero-spin nuclei, because hole wave functions vanish at each nucleus.  Long coherence lifetimes are anticipated in this system but have not yet been measured.  The single nanowire is a good platform to investigate one-dimensional arrays of quantum dots that can be entangled using exchange, and entanglement swapped between neighbors [8].

Rapid dephasing of prepared entangled electrons upon spatial separation, observed in GaAs, 13 C, and InAs spin qubits to occur in under 10 ns, can be recovered using dynamical decoupling schemes that generalize and improve conventional spin echo [9].  Coherence times including dynamical decoupling exceed gate operation time by more than five orders of magnitude.  It is not known in general how to interleave decoupling into quantum algorithms, nor is it known how well these schemes work to reduce hyperfine dephasing beyond two electrons.  How decoupling can be applied, for instance, in the three-spin exchange-only qubit has not been described theoretically nor attempted experimentally.  This straightforward first step will initiate this direction in the Center.