Jesper Nygård has been appointed professor of experimental nanophysics at the Nano-Science Center at the Niels Bohr Institute and he is co-founder of the new research center, Center for Quantum Devices. The professorship also has special responsibilities (MSO) within the University of Copenhagen’s interdisciplinary Synthetic Biology project . 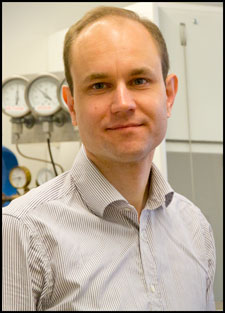 Jesper Nygård has been appointed professor
of experimental nanophysics at the Nano-
Science Center at the Niels Bohr Institute.

Jesper Nygård does research in nanoelectronics. In experimental research in the laboratory, he is working with solid-state materials to study how the electrical properties function in the tiniest possible components on a nanometer scale.

“It is very interesting,” he explains “we are looking at how the electrons behave at the atomic level and we can see, for example, that if a wire is so small that only one electron can run through it at a time, quantum phenomena arise, which causes the system to behave differently. The component can occupy multiple possible states at once and it can, so to speak, be both on and off at the same time. Furthermore, the electrons have a spin that we can control magnetically.” They are complicated experiments at ultra cold temperatures close to absolute zero at minus 273 degrees. The research could lead to quantum computers of the future, which are the successors to today’s supercomputers and will get an extra boost when the Center for Quantum Devices opens later this year.

A new direction that Jesper Nygård is occupied with is the development of nanoscale components that can be used as sensors and microscopic measurement instruments in biological systems. Such a nano-measurement instrument is extremely sensitive and will, for example, be able to measure molecular reactions in living cells and record how the cell reacts to an applied substance. The research takes place within the interdisciplinary Synthetic Biology project at the University of Copenhagen.

Jesper Nygård received his Master’s degree from the Niels Bohr Institute and received his PhD from here in 2000. In 2002, he was at Harvard University and in 2003 he became an associate professor at the Niels Bohr Institute. His research group includes 7 PhD students, 4 postdocs and several technicians and the experimental research is carried out in close collaboration with theorists, chemists and biologists at the Nano-Science Center.

But his career has not ‘only’ been pure research. From 2005-08 the Ministry of Science appointed Jesper Nygård as one of Denmark’s three astronaut candidates.

“It was really fun to participate in the astronaut training, but for me it is the research that is the future,” says Jesper Nygård, who of course has an office closest to the sky on the top floor of HCØ.